My wife and I parent three boys; 16, 11, and 3. Even if it means only getting a few hours of sleep and taking an energy shot, we’re willing to go hard to be an active part of their lives. I’m sure you probably make similar routine sacrifices of your own plans to give your children more opportunities to pursue their interests. Besides giving them opportunity, another reason why we all sacrifice so much is to be part of their world, to serve as a firewall to protect them from harmful situations and influences. Discerning the pitfalls and agents of harm is inherent in us as parents. I mean, let’s face it. Children have little to no discernment for themselves, therefore we hold that position of being their chief protectors. As they grow older, their discernment begins to develop being guided primarily by our discernment.

We are bombarded with culture. It’s everywhere. You can’t turn anywhere in society that is not dripping with our ever changing culture. So when it comes to parenting, we constantly tend to monitor the most problematic areas we think are harmful: their friendships, music, tv, YouTube, internet access, movies, and list never ends. But what if we are missing something that is so obvious but yet seems to fly completely undetected by our internal discernment radars? What if we’re catching a lot of the small issues but missing the bigger picture?

If you’re reading this blog, then more than likely you understand that I am a Christian father. No surprise there. And as a follower of Christ, I want to be a Christ-like example for my boys to see. Actions speak louder than words, so I want my example to ring true for my sons to witness and follow. And while part of that responsibility is for me to teach them to discern worldly culture when it appears, what do I do if I don’t or can’t discern the most important thing to teach my kids to watch out for? What could I even be talking about? Pride. My own pride.

When the Father started taking me through an understanding about pride and then humility, it caught me off guard. I mean, I don’t really think of myself as proud in an unhealthy way. I really don’t think I’m arrogant. I don’t play favorites. I don’t brag. I treat the janitor and the CEO the same way. I mean, I’m a pretty great guy. Just ask me! LOL! But I was at a point where I was really seeking God so I was willing to go along with Him down this rabbit hole if He wants. But in my seeking Him, I began to see things for the first time in a way that had been there all along. Let me give you a string of observations that came to me in the process.

The very first sin that ever happened was in heaven. Lucifer, who was very beautiful began to look at himself and pride took root in his heart. He desired the glory that belonged to God and God alone (Ezk 28:17). Fast forward to the garden of Eden. At the genesis of the human race, the snare he set for Eve and Adam was one of pride: to be like God knowing good and evil. If we’re talking Bible Trivia, these are easy questions. But what about this: If pride can cause an arc angel, who lives in the very presence of God and heaven, to fall and be cast out, then how much more do you think that we humans may be susceptible to the power of pride? And when in Eden, of all the things he could have tempted Eve with, why do you suppose that he chose pride to tempt her?

There is great significance in these two accounts of sin. The first sin ever being pride happened in heaven, and the first sin in man was pride too. So it is both Biblical and logical to conclude that pride is the root of all sin. Therefore, if salvation was to redeem us from sin, it’s only reasonable to state that the greatest need is for us to be redeemed from our own pride.

It’s easy to see the gross pride. The arrogance that’s bold often times is even repulsive in our own culture. But when it comes to that subtle pride that lives in our minds, hearts and attitudes….it’s pretty much non-discernible. As for the subtle forms of pride at work in you….I promise you don’t see them. You can’t see them. The only way to detect the subtle pride in our lives is by humility.

1 Peter 5:5 says “….Yes, all of you be submissive to one another, and be clothed with humility, for “God resists the proud, But gives grace to the humble.”

I don’t know about you but I don’t want God to resist me. I want His grace! Especially in parenting my three sons wanting to be a Christ-like example for them to teach them discernment. But at times it seems like I’m not really operating much in that grace. “He gives grace to the humble”? Ok, what does that mean? Do I just need to talk bad about myself, be kind of wimpy, throw myself under the bus a few times and that’s humility? How far from true that is. Often times Christians have a false view of what biblical humility is.

How do I get more humility? The Bible many times over makes this pretty clear. Humbling ourselves is our job. How many times have you read in the Bible, “if you will humble yourself…”, “if my people will humble themselves…” Trust me, you don’t want God to humble you. And honestly, God doesn’t want to humble you. Instead, He has repeatedly offered an invitation for us to humble OURSELVES.

It’s imperative we realize that at the very root of the character of Jesus is humility. All His love, gentleness, mercy, and every other incredible quality of his that we want to be more like for our kids….those all stem from His humility. When did Jesus humble himself? If you remember it was in Heaven where He humbled himself. He brought His humility here. So in His plan to bring us salvation, he humbled himself to become a man. To come to His own creation and serve, not to be served. But wait a second??? Why is God humbling Himself? If there’s anyone in the universe that doesn’t need to humble himself, it’s Jesus! Yet that’s what He did because that is exactly WHO HE IS. And there wasn’t even room in the hotel for him when He was born.

You can’t look at one page in the New Testament and not see the humility of Jesus. He lived small. Remember when he said “….The son of man has no place to lay His head” He thought small by using things like five loaves and two fish to solve big problems. He chose disciples no other rabbi would have accepted. He rode into Jerusalem at the beginning of passion week….on a donkey (humility). He washed Judas’ and Peter’s feet. He didn’t even spout His own opinions but kept His words and actions reserved only for what His Father wanted Him to say and do. Humility was the core of who He was. And it was because He was humble before His Father that He was able to humble Himself in service to men. Even when they took advantage of Him, abused Him, betrayed Him or denied Him, it was His humility before the Father that caused His heart to cry out “Father, forgive them because they don’t know what they do.”

I want to peel the curtain back and share with you one of my many experiences on this journey. I was really seeking the Lord this last year, you know, just trying to go deeper. I realized that His invitation was for me to humble myself and I was willing to accept. But what do I do? What am I supposed to say when I pray, God? I was being just honest with Him and I distinctly heard Him say, “Josh, you don’t even realize the arrogance of your assumptions.” I was thinking to myself, “what does that mean?”. In an instant the Holy Spirit recalled the story to my mind of when Jesus got in Peter’s boat and launched out a little way to teach the multitudes. (Luke 5:1-11) After he was done teaching, Jesus tells Peter to go to the deep for a catch. Peter, the professional fisherman, proceeds to basically tell Jesus that it’s the wrong time, they’ve already done it, yada yada. I mean, what does the carpenter know about professional fishing. But out of respect he obliges Jesus. When they catch so many fish that their boats begin to sink, what did Peter say to Jesus? V8 “Depart from me for I am a sinful man!”. He didn’t say, “Wow! How cool! Thank you!” Peter was instantly convicted…of his PRIDE. He didn’t see it as pride until Jesus exposed it for what it was. So when I was praying and I heard Him say, “Josh, you don’t even realize the arrogance of your assumptions”, then realizing what He was referring to, my own pride then became exposed to me about how many times I talk to God but assume I know the outcome. That was pride in my own heart that I had no idea existed and I didn’t discern it until I really began to try and humble myself. And the Bible tells us that He resists the proud but grace He gives to the humble.

We who follow Christ are so often times so far from what I’m describing. Even Jesus’ own twelve were found arguing several times who would be the greatest in the kingdom. Wow! These guys were there with Christ Himself and were still so full of pride even after they had forsaken all to follow Him. We’re not any better off than them. We want to be vindicated when wronged. We want to be patted on the back for helping those in need. We create our own little worlds where we seek recognition from others for doing service to God….kind of like what Lucifer wanted when He was leading worship in Heaven.

When it comes to parenting your children and guiding your home, your family needs to see the humility of Christ on each page of your life. You can try to be a Christ-like example in many ways like serving, forgiving others, and giving financially and still be so full of poisonous pride and never see it. Unless you actively accept the Father’s invitation to humble yourself, there will be many things in your life you won’t be able to discern, all the while you are trying to teach your children discernment. I guarantee that if you will humble yourself and honestly seek for the Father show you things about your own heart and let His Holy Spirit do a work of deeper humility in you, your Christ-like example to your children and spouse will have such a greater impact of insulating your household from so many of the things you’re trying to protect them from and your discernment will grow dramatically sharper.

For more on Discerning Dad including information on my book, Everyday Discernment, click HERE 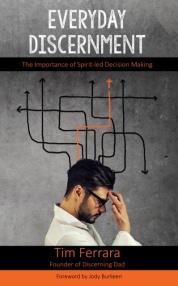